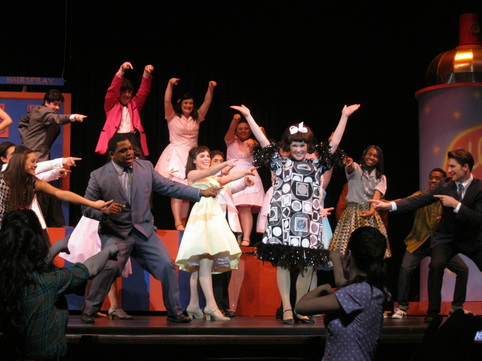 Although I learned to sew as a child, I didn't start making costumes until 1997. I graduated from college in 2001 with a BA in History from CalPoly, SLO and in March of 2012 I graduated with an MFA in Costume Design from UCLA.  My work has been seen on stages across California.  Below are slide shows featuring some of my work.  In 2009 I won the Sacramento Area Regional Theatre Alliance's Elly Award for Best Costume Design in Educational Theater for the St. Mary's High School Production of Anything Goes. I was also nominated in 2011 for Hairspray, and again in 2012 for Once in a Lifetime.

What of the Night?

Written by Kim Rosenstock. Directed by Caitlin Hart.
Presented by the Illyrian Players Theatre Company. Photos by Kate Hagerty.
This little play ran from May 3 - May 24, 2014 at the Studio Stage
to sold out crowds every night.  You can still watch the trailer.

Written by Nicholas Zill. Directed by Caitlin Hart.  Produced by City in a Swamp Productions.  February 15 - March 30, 2014.  A funny show that got some great reviews, it performed at the Acme Comedy Theatre in Hollywood, CA.  Photos by Kate Hagerty.

Written by Irvine Welsh. Directed by Roger Mathey.
Produced by seat of your pants productions.
It ran March 9 - June 1, 2013 at the Elephant Theatre in Hollywood, CA.
It garnered rave reviews.
You can still watch the video trailer if you want to check out what you might have missed.

Written by James Kopp And David Rock.  Directed by John Morrison.
Produced by seat of your pants productions.
It ran August 16- September 23, 2012
at the Ruby Theatre @ The Complex in Hollywood, CA.

A musical revue directed by the lovely Lainie Kazan.
Performed by the musical theatre students at UCLA.

Is There Life After High School?

Directed by the esteemed Gary Gardner.
Performed by the MFA acting students at UCLA.

Photos from earlier productions,
including my Elly award winning designs for Anything Goes, at St. Mary's High School,
in Stockton, CA.